When all nations failed, only one group—the Zionist Organization—had the courage to boldly face the Nazi hierarchy to save 60,000 German Jews, transferring them to Jewish Palestine with their assets to build a new life—as Moses had done millennia before. Now the story will be told.

Famed New York Times bestseller Edwin Black, author of IBM and the Holocaust, has authorized this first-ever translation of his critically acclaimed and revelatory book, The Transfer Agreement, published in Brazil as Haavara, by Idea Editora. Haavara is Hebrew for "transfer."

Join the Jewish Brazilian Confederation, the Jewish Federation of the State of São Paulo, StandWithUs, Scholars for Peace in the Middle East, ZOA-MI, Israeli-American Council and other groups for a Zoom presentation hosted by The Edwin Black Show and Idea Editora. You can join the presentation starting at 6:40 pm BRT via this link, by going to the presentation page and tapping the “Join” button, by opening your Zoom app and joining ID: 865 2558 7403 with passcode: 638718, or via phone: +1 301‑715‑8592  or +1 929‑205‑6099. If you have a question, you can use Zoom’s Q&A function during the presentation or email ask@TheEdwinBlackShow.com. 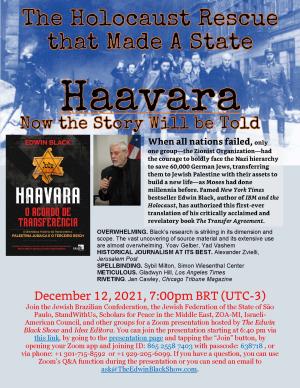