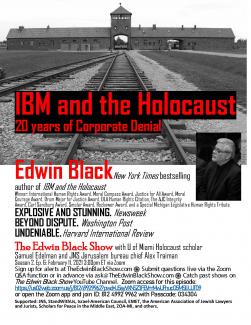 20th Anniversary of IBM and the Holocaust

Twenty years ago this week, IBM and the Holocaust exposed with crystal clarity—backed up with a literal tower of physical documentation—that IBM knowingly organized all six phases of the Holocaust: identification, exclusion, confiscation, ghettoization, deportation, and even extermination. All of this was done under the micromanagement of its celebrated CEO, Thomas Watson, Sr., operating from his New York office on Madison Avenue, and later through European subsidiaries. IBM has never denied a word of the book. Now University of Miami Holocaust scholar Samuel Edelman and JNS Jerusalem bureau chief Alex Traiman join Edwin as he shares the inside story behind the global revelation. 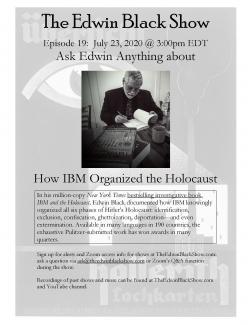 Ask Edwin Anything: IBM and the Holocaust

In his New York Times bestselling investigative book, Edwin Black documented how IBM knowingly organized all six phases of Hitler’s Holocaust: identification, exclusion, confiscation, ghettoization, deportation—and even extermination. Available in many languages in 190 countries, the exhaustive Pulitzer-submitted work has won awards and acclaim here and abroad. Edwin answered many of your questions in this topic-specific AMA.