Israel and the UAE announced on August 13 that they had come to an historic peace agreement, the Abraham Accord. Since then, the Gulf State of Bahrain has joined the expanding the peace initiative. All three nations have established full diplomatic relations and signed treaties on September 15 at the White House. More countries are readying their recognitions, and President Donald Trump has been nominated for a Nobel Peace Prize.

Rabbi Abraham Cooper of the Simon Wiesenthal Center, who personally visited Bahrain, Jonathan Tobin, editor-in-chief of JNS, Zalmi Unsdorfer, chairman of Likud UK, Joshua London of JINSA, Mordechai Kedar, Arab scholar and lecturer, and other key Mideast experts join Edwin to explain the background and to explore the possibilities for the future. 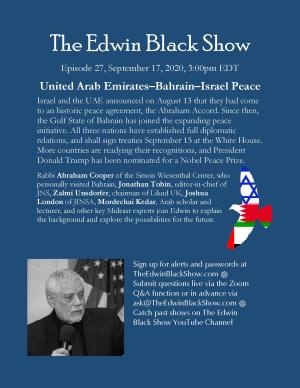